This week’s post comes to us courtesy of Janine Cadet

After a week of completing two orphanages and an exciting adventure at Mole National Park, the Kaeme group eagerly entered into Week 3 of our trip! Our next stop was Adullum Orphanage in Obuasi. Our first day there we started with our informal interview (or as we love to call it – playing with the kids). This was the start of our first challenge of the week… football.

As soon as the football was brought out of the van, the children were ready for an intense game. The teams had already been made, unfairly if I might add. The Children vs. The Interns.  We had to face almost 20 children and let me tell you, it was not easy. Even though I consider myself athletic, I knew I was no match for these kids, so, I decided to declare myself the goalie. We played for almost an hour, non-stop, and it seemed like these kids would never get tired. On the other hand, our team was slowly deteriorating. Every few minutes, another intern would be leaving for a water break. But, we put up a good fight! By the time we forced everyone to take a time out and end the game, we only lost 5-2! 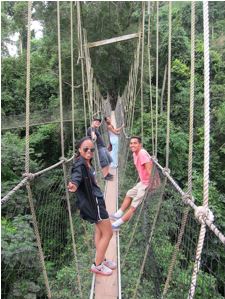 After seeing how athletic these children were, we decided to tone down the games for the next few days. We started to break up into groups and play smaller and less intense games. A few of the interns began to teach some kids how to throw a Frisbee. While one intern decided to blow up some balloons and play with the younger kids! They all had such a good time and the interns seemed a little more rested by the end of the day.

After spending a few days with the children, the interns couldn’t be more excited for our Cape Coast day tripped planned for Saturday! Waking up at 6 a.m. and driving 4 hours, our first stop was at Kakum National Park for the Canopy Walk! Fear set in for some once we reached the top of our hike and began to see the canopies we would have to walk across. Everyone agreed that we would do all seven canopies and not the three-canopy short cut. Although it was a challenge for some, we all agreed that we had such a good time! Taking a million pictures and selfies during the walk and, occasionally, holding up the line doing so. Some sang some songs to help ease the feeling given by the shaking canopy (Hakuna Matata was a life saver). But in the end, we all completed the canopy walk, and have hundreds of pictures to prove it! 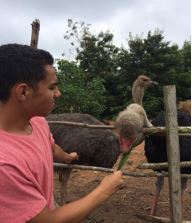 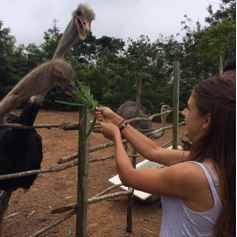 The next part of the trip was a total surprise. As we were driving to have lunch, we stumbled upon an ostrich farm. As we followed the signs down a sketchy and very bumpy road, I was feeling a little anxious about where we were going. However, a short while later we found the farm. We drove up to a fence where at least 7 ostriches were walking and eating. The next challenge presented itself: Who was going to be brave enough to feed the ostriches? I, personally, couldn’t get myself to do it. However, a lot of the team ended up succeeding! Apparently, an ostrich bite doesn’t hurt because they do not have teeth. The only dangerous part on them, according to our guide, was their toe. One kick from an ostrich, when they are mad, could cause serious injury. After hearing that, I decided to keep a little bit of a distance, but still was able to take some great pictures. 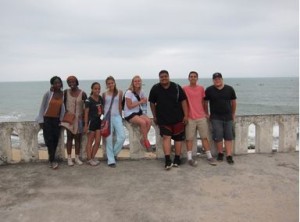 The last stop on our trip was visiting the El Mina Slave Castle. That visit was by far the most overwhelming part of the trip for me. Touring the castle and hearing the stories that our tour guide was recounting definitely touched me. Walking through the slave dungeons and understanding why it still has a smell that it does makes you shudder. Seeing the “Door of No Return” and knowing how many people were forced from their home country and had no chance of coming back sends chills down your spine. Hearing how the slaves were tortured if they couldn’t follow orders simple leaves you asking, “How can one human being be so cruel to another?” It was a challenge throughout the tour to keep myself together. However, it was a piece of history that I will remember always.

After having such a long day of adventure, we took another four-hour drive home. The interns, all exhausted, slept in the next day and enjoyed a relaxing day. Now rested and enjoying the Monday holiday of the end of Ramadan, we are ready to tackle the next week with more children, challenges, and adventure in Gha