I rub my feet in the sand; my wrinkled toes breathe in the sticky air, finally free from the sweat traps we call Toms™. The giant waves tower above our bodies at 10 feet, but we run towards them childishly. Pummeled and pummeled and pummeled again then dragged underwater through the coarse sand, we’re taken back to shore. Our mosquito bites sting in the salt, but we’re unfazed. For a few hours, there is nothing but the roaring sea harmonizing with howls of laughter, and for a few hours, our minds our free from the gravity of our work. 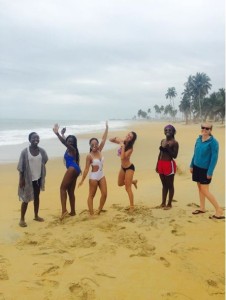 On Sunday, we visited Brenu Beach Resort, which lies a few kilometers from the city of Cape Coast. The beach was nearly deserted bar the resort employees and the occasional nomad. For the first time this trip, we were given a rest from the constant chaos of city life, of constant attention, of constant catcalls. Constantly constant. For six weeks, our brains have been continuously stimulated with new sounds, new smells, new sites, new language, new culture, and it has been incredibly exciting! We want to absorb it all, to live it in the moment and to feel it in the moment. But sometimes, with all the new, there is no space or time for reflection. (And with the way I have been planning weekend trips, there is also no time to rest! No one will forget our 3am departure for Mole National Park followed by a full day of safari after safari!) Now, at the beach, after tiring ourselves out from splashing around in the water, we had the perfect, peaceful setting to reflect. 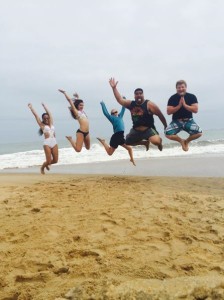 The emotions provoked on this trip have been on a spectrum, ranging from initial fear of the novelty to wholesome joy in chasing around ecstatic children to frustration with managing patience to transcending awe in seeing wild elephants. But for me, the hardest thing to process is the disconnect between the happiness and laughter that we get to experience with the orphans and the pain and depression of the children’s past, which we read about in the children’s files. Many of the children’s stories have made my heart heavy, but despite their background, most of these children have the widest smiles and most positive attitudes. To say the least, it’s inspiring. I’ll share the story of one child that immediately stole my heart: Alfred. 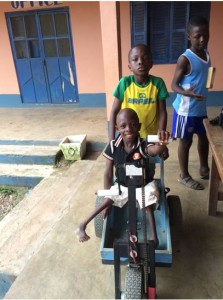 Alfred is the essence of everything that is beautiful about a human being. He’s four years old now—we think. He was found on the side of the road as an infant, abandoned…so no one knows much about where he came from or how old he really is. He likely suffered from polio at a young age, as the muscles in his legs have atrophied to nothing. His pancake feet dart out laterally at his ankles, with no ability for flexion or extension. Yet, despite his condition, he is one of the most active kids at the orphanage. When we’d arrive at the orphanage each day, the kids would stampede toward us, flailing their arms, trying to be the first to give us all hugs. Sure enough, at the front of the charging children was Alfred on his hand bike. (To keep up with the rest of the kids, Alfred has a trolley that is powered by a hand bike). He’d drag himself off the trolley, give me the biggest, whitest smile and throw his arms in the air; code for “pick me up!” For the rest of the day, Alfred would be attached to my hip. We tried playing Frisbee a few times. I’d hold Alfred up, and he’d be my ‘arms’ for the game: he’d catch and throw, and I’d do the running. Alfred soon found out that if he missed the Frisbee, it would hit me in the face, which he thought was the most hilarious thing. Needless to say, I started running away from the Frisbee…so we actually were not the greatest Frisbee team. Alfred would join in on our soccer games as well. He’d drag himself across the dirt field with his face inches from the ground and all the other kicking feet. I’d hold my breath every time he’d be in a scrum because the other kids would accidently kick him in face if it traded places with the ball. They didn’t treat him differently because of his condition, and he didn’t let it stop him from doing anything he wanted to do. Here is this four-year-old boy, who’d been left on the side of the road, paralyzed from the waist down, living in an orphanage where the toilets were slightly tilted cement slabs, and he was just being a normal, happy, innocent kid. It’s so beautiful. I can only hope that when the naivety wears off, he keeps his will to be strong and fight the debilitating hand he was dealt. 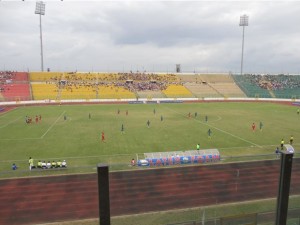 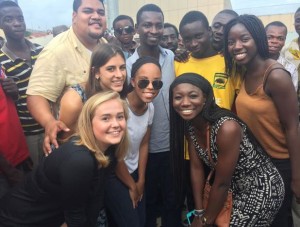 We can only hope that the work we are doing here will put these strong, deserving children in loving, stimulating homes.

Aside from the reflection that came with this weekend, our team went on a few other adventures this week! Before leaving Kumasi, we attended a premiere league football match between Asante Kotoko (Kumasi’s football team) and Wa. After the match, we stuck around to meet a few of the players, including Dauda Mohammed. It was unclear who attracted more attention: the soccer players or us—the obrunis! Never in my life have I had more camera phones pointed at my face!

We moved to Cape Coast on Friday, and on Saturday, a few members of the team went to check out Cape Coast’s 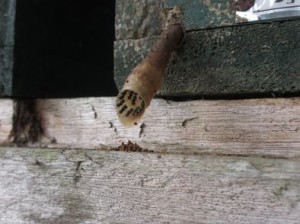 International Stingless Bee Centre. At the International Stingless Bee Sanctuary, we learned about six different species of stingless bees. These bees are master pollinators, make honey, and make an antibiotic called propolis. On species of stingless bee is attracted to the sweat on people’s faces. We were told that these bees provide the ultimate facial: drinking the sweat off one’s face and even popping one’s pimples. Another species of stingless bee as a particular defense mechanism. When they feel they are being threatened, they will all swarm out of the hive at once, landing in a person’s hair and crawling into any available orifices. I got too close to the hive, and then the guide had to spend a few minutes picking bees out of my hair. Later we got to stick our hands in a hive! I’m not sure if this was our proof that these bees did not sting or some strange therapy to assuage my fear of flying insects. At the end of the tour, we taste tested honey from three of the different species. I think this was Prince’s (our driver’s) favorite part! As a pre-med, I was very interested in the antibiotic; I ended up buying some propolis, which I was told is good for treating skin infections and ringworm 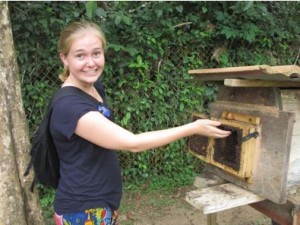 Before the International Stingless Bee Centre, we stopped at the Monkey Forest. The Monkey Forest is an animal rescue shelter run by a Dutch couple. Most of the animals there were babies whose mothers had been poached. The animals usually only stay at the shelter until they are strong enough to be released into the wild. We met a few species of monkeys: Paga, Vervet, Mona, and Black-cheeked white-nosed. We met some crocodiles, a baby antelope, a baby python, and a baby civet cat. We were introduced to a box where the baby scorpions were supposed to be….I got punched in the face by the same monkey that groomed Nancy, and then Nancy and I took turns holding the baby civet cat. Apparently when these cats are full grown, a group can hunt and kill a lion! Anyhow, civets produce a liquid from their perineal gland called civet. This yellow, waxy substance is used to mark territory; surprisingly, it’s also used in perfumes! The civet cat either marked us as territory or pooped on us. Hence, later on at the stingless bee centre, I bought the propolis specific to treating ringworm! 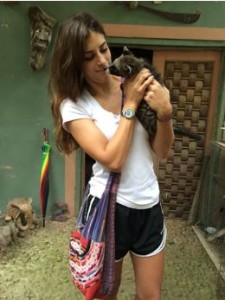 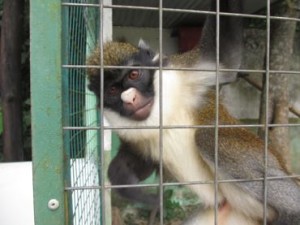